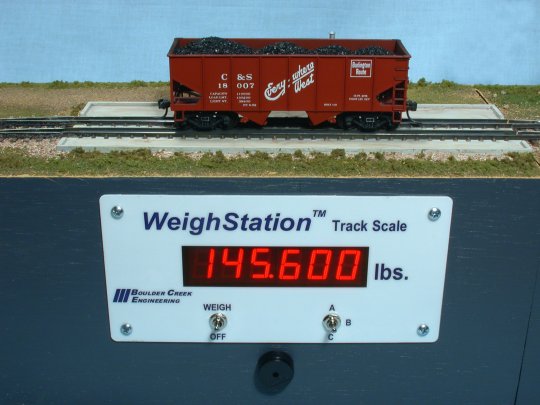 Installing a WeighStation Track Scale is easy, and here are the pictures to show just how simple it is. We began with a finished Track Scale scene, created with Walthers structure kit #933-3199...

Step numbers correspond to the installation steps in the product manual.

Start with the Track Scale Scene 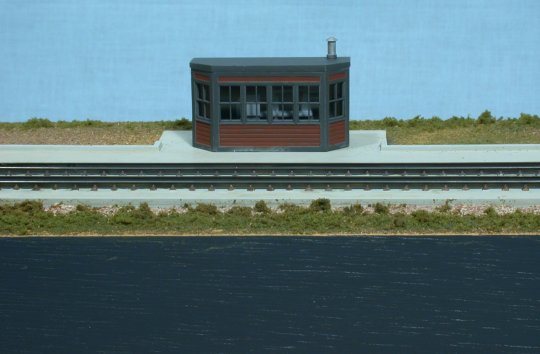 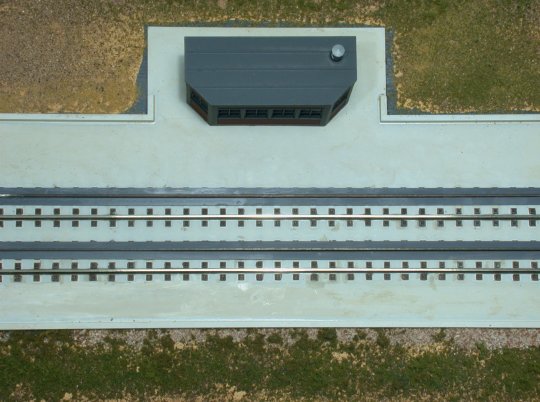 This is a gantlet scale track arrangement on a concrete pad modeled in styrene. Scale rails have black dirt covers (0.020 x 0.100 styrene strips) on both sides of the "live rail".

Rail cars are routed to the scale rails via modified #4 turnouts as described in the April 2009 Model Railroader. 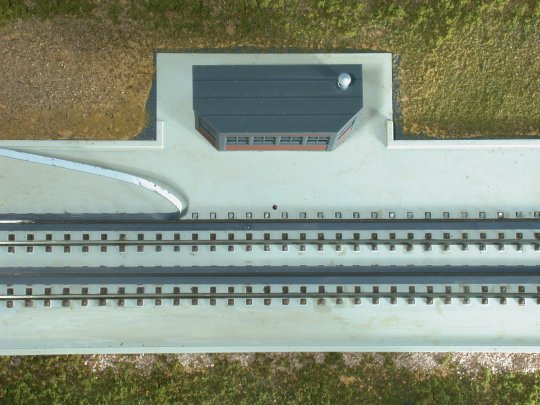 Drill a 1/16" pilot hole 3/16" from the outside of the scale rail nearest the scale house as shown.

To keep it intact, we've pulled the dirt cover back, exposing the unpainted underside of the styrene strip. 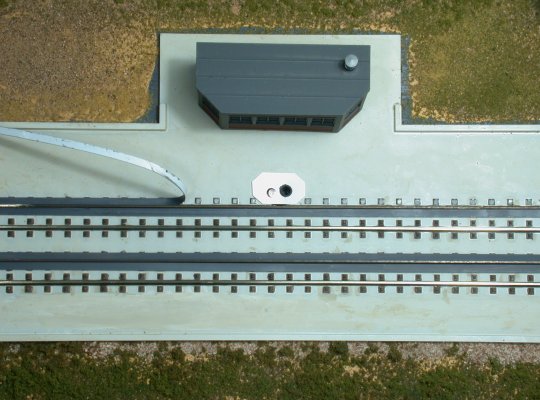 Step 2c: Fashion a cover from 0.005" styrene sheet as described on the NightScope alternative installation page.

Slide the cover over the LED and shroud of the Infrared Detector, and insert the Detector into the 3/8" hole.

Glue the Detector in place and cement the cover to the surface of the "concrete pad".

Cement the dirt cover back into place, and paint the Detector cover to match the concrete pad. A bit of weathering will help it to disappear. 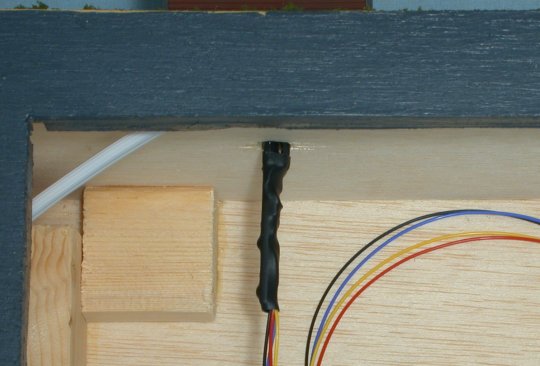 Step 2d: Here is the under-the-layout view of the installed NightScope Infrared Detector. 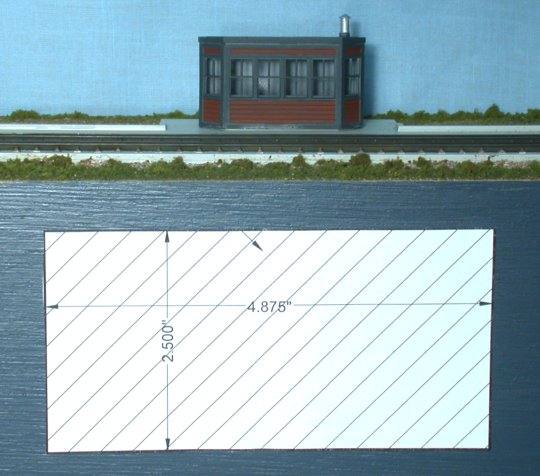 Step 3: Now use the Fascia Template to mark the hole for the WeighStation Track Scale.

A simple way to do this is to cut out the crosshatched area (the correct size for the hole), align it on the fascia, and tape or glue it in place. Then scribe along the edge of the template to mark the hole. 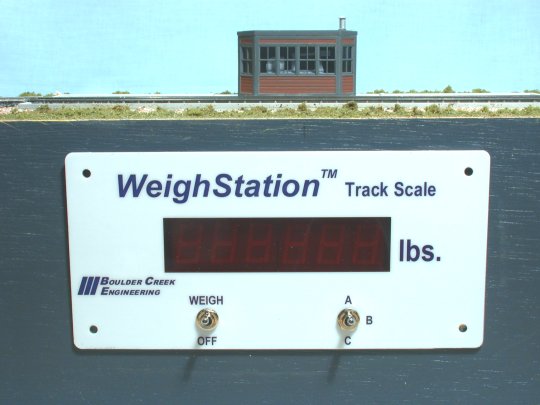 Step 4a: Drill 1/4" holes in the four corners of the marked cutout area. Cut out the fascia hole with a saber saw.

Align the WeighStation Track Scale in the fascia hole to your liking. Use the Track Scale to mark the #4 corner screw holes. 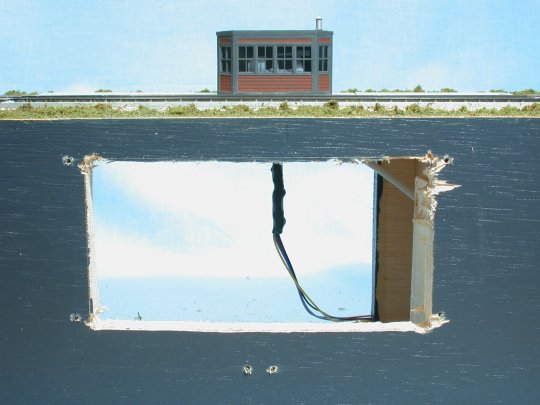 Step 4b: Here is the cut out fascia, along with pilot holes for the #4 corner screws. (A thin Masonite fascia will not need pilot holes.)

The splintering from the saber saw cuts is covered by the Track Scale as shown in Step 4a above.

It's easier to wire the Track Scale before mounting in place in the fascia.

Protruding from the fascia from left to right: Bell Assembly wires, power wires, and NightScope wires. 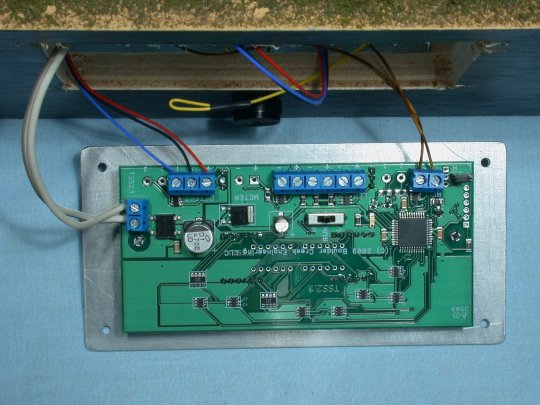 Notice that the YELLOW Infrared Detector wire is not used: we have bent it back on itself and used heat shrink tubing to insulate the end.

This is the wiring for the Digital Display Track Scale... 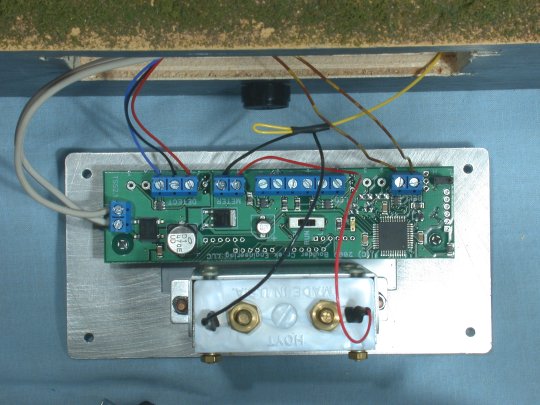 ...And here is the wiring for the Meter Display Track Scale. Note the black and red wires from the Meter Assembly to the circuit board.

Position the Track Scale and drive home the #4 corner screws.

You will have your WeighStation Track Scale ready for action in no time!